As I sit here today, fear and anger in this country is getting to palpable. We are mad at our leaders for not hopping into fix a financial mess, we are angry at greedy people who took and took and now we must pay. We are afraid of tomorrow and whether we will have the money we need when we need it. We want our leaders to do something but we have differing opinions on how to handle it.

As I was driving with my son, James, I was trying to translate the problems, which he did notice, into terms a six year old (in 40 days on election day he will be 6) could understand. Lately, his favorite breakfast food is Cinnamon Toast Crunch Bars. He will eat only those out of a three pack of flavors. Surely, I thought that only having one of these precious bars would convey the idea of scarcity and the fear of it. Sure enough, he got that not having a bar for him and his sister would be a bad thing and he might not be happy if he was told it was the last bar. But, then he answered in a way guaranteed to make any Christian parent happy. He didn't say he would be fighting with his sister to get the last bar. No, his response was, "Dad, we would just have to cut the bar in half and share". I thought immediately of the early Christians and the Book of Acts.

In the Book of Acts, we see the early Christians doing just that "[t]hose who owned fields or hoses sold them and brought the price of the sale to the apostles and made an offering of it. The apostles then distributed it according to each person's needs". Acts 4: 34-35 from the Message translation. God has always found a way to provide to the people. Joseph and his dreams to warn the Pharaoh and ensure that food would be stored. Manna from heaven to feed the wandering people, etc. But the message has also been, don't hoard, share, take only what you need. Wouldn't it be nice if we Christians actually lived like that now, today.

By the way, I didn't try hard enough with the cereal bar analogy. When I made it the last piece of candy, well then the gloves were off and the bidding war was ready to begin.
Posted by Kurt Young at 4:45 PM No comments:

"Prayer is the way to stay in love with God!" 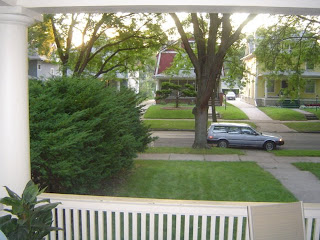 In Unbinding your Heart: 40 Days of Prayer and Faith Sharing, Martha Grace Reese writes: "Prayer is the way to stay in love with God" (p. 37). I am a self-identified progressive, AND I love Jesus. I've been told by some, that those two things don't always go together. That puzzles me. But that's a post for another day. . .

My entire life, I have struggled with having a daily prayer routine . . . doing it for awhile, and then falling off the wagon and failing to do so for awhile longer. About 3 years ago, sitting on my front porch (I'll try to post a picture here), I had a deep experience of prayer that changed my life. I came to love Jesus and not be afraid to say that outloud. I'm still the same Cheri -- with a passion for justice and making the world a better place for all -- and now I also have a passion for taking the time to meet God, and rest in God, and listen for God's nudgings. And so, yes, I would have to agree with Martha Grace Reese: "prayer is the way to stay in love with God."

I know that my life is more balanced, and I am more content and centered, when I pray every day. And yet I find this discipline a challenge. (I never really liked that thing: "discipline.") Still, I find myself hungering for a spiritual rhythm -- a practice -- that draws me closer to God on a daily basis.

I'm starting another 40 day prayer practice today, much like the one I did in the Fall of 2005 that eventually led to God showing me a vision for The Village Church. I'm putting this commitment on my blog and inviting my friends to help hold me accountable. How about you? Do you find that prayer helps you stay in love with God? Is the practice of prayer, on a regular basis, a challenge for you?

Peace,
Cheri
Posted by Cheri Holdridge at 9:03 AM No comments:

Last night I saw the film "Traitor" with Don Cheadle. What a great film! Cheadle is fantastic. This film shows the complexities of religion and what it means to love God. In a compelling story line, we see how fundamentalism, in any religion, CAN lead to fanaticism and terrorism, but does not have to. The simple truth of the film is this: there exist in our world both Muslims and Christians who love deeply and who show great compassion for other human beings. This film is an invitation for all of us to learn and value what it means to be citizens of a global world.
Posted by Cheri Holdridge at 9:24 AM No comments: