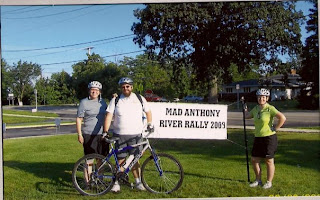 I hate to say it, but God has gotten a bit too subtle for my tastes over the last few thousand years. Remember the Old Testament, when God spoke to people? No doubts on the signals there. Burning bush says go get my people out of Egypt. Go to Nineva or enjoy some swimming in the fish belly. Even in the New Testament, things were pretty over the top, the sky opens up and “this is my son, with whom I am well pleased”, the rending of the curtain in the Temple, etc. Not exactly subtle.

And when you’re trying to guide people, subtle is not good. Now is when my fellow members of the Village Biking Group will cringe, cause they know the story that is coming. Our group, which started with Pat Groves, suggesting that a few of us get together and ride to train for Bike to the Bay, has blossomed into our largest and must active small group. We gather to ride together for fun, and do some good. To that end, we ride in fund raising bike rides like the recent Mad Anthony’s River Ride, where a group of us rode 31 miles.

Now, when we ride for fun, we do them on a bike trail. Pretty easy to navigate really, you park at the one end of the trail, mount up, and ride to the other end. Pretty hard to get lost, really. However, on these fund raising, do gooder, rides, they send you out on the roads too. Sticking to trails can be fun, but getting out in the world is better, and no one trail in our area is 31, 62 or 100 miles (the most common distances). So, a map becomes necessary. Also, the organizers usually give you a little more help than that. They mark the course with special marks on the ground (e.g. on the Metroparks Bike Tour, they had M’s with arrows pointing the way for each distance, spray painted on the ground on the route) However, let me tell you, we’ve had some map issues and signs issues.

First, when we did the Metroparks Bike Tour, we discovered a slight problem about nine miles into our ride. One group of us were going the sane 31 mile route (I know, for non-bikers, you’re saying “Sane” to 31) and the other group was going the insane 62 mile route (they disagree with the lack of sanity allegation). There were maps for all distances. The problem is that they gave those of us on the 31 mile course the wrong map. Thankfully, my fellow rider and friend Janet is a quick study and wrote down our turns from the only copy of the 31 mile map available at the 9th mile rest stop. Also, there were those M’s on the ground and they were well painted.

But, and you know there has to be a but, right, that was not what happened to us on the Mad Anthony Ride. First, you need to know that we all got good copies of the right map (thanks for trying Maria). But, well, we had an equipment malfunction (my odometer went down and I had the group’s only one) and well, we had a not bright moment. We were cruising along, about 12-13 miles into the ride and generally loving life. Great weather, good friends, we were making good time, and at the 17 mile mark were the free pancakes (a great way to ruin the couple of thousand calories of exercise we were getting). Ah, but then the rub. We were on a long trail (yes, love the trails), passed a rest stop (no stopping for us, pancakes were within reach, just 4.6 miles to go). Things seemed going great, but oops, aren’t we past 4.6 miles and no pancakes. Nah, we must be just under estimating the distance (remember no odometer). Well, we kinda missed a turn, and I kid you not it was about a tenth of a mile from that 4.6 miles ahead sign (they meant on the course, not on the path, bad organizers, and not bright riders). Not only no pancakes, but the 31 mile distance (my longest to date, as my bike broken down and mildly hurt me at mile 28 on the last 31 mile attempt) became about 40 (think extra hour and again, NO PANCAKES). As we retraced a way back onto course, I saw that subtle, missed sign. A circle with a line the direction we were to turn. UGGHHH!. Subtle signs = BAD.

Like I said, my problem is that God has gotten like that. I don’t know about you, but the heavens have never opened up, no “well pleased” for me, and while I have seen a burning bush, at a church event no less, it didn’t speak to anyone. Don’t get me wrong, God has spoken to me, lots of times, but man, God has gotten subtle.

For example, on our ride for the Metroparks, Janet & I had just about hit the wall. There was a huge hill. Near the top, we were both ready to give up. But, then, I kid you not, at the top, a soaring bald eagle. Janet is a huge bird person, I’m a patriotic and flight nut. Come on, you can’t be cynical enough to say that was coincidence? If you do, flash forward to the 40 mile, oops ride, about mile 37 or so, as we’re all dragging, there’s the eagle AGAIN, soaring in the sky, directly overhead. Two different rides, same sign.

Then again, they just seem to pop up for me. Go back 19 years this month. I was away from home for the first time in my life, starting law school. No friends yet, family an hour away +, and everything was going wrong. The mess up my room assignment in the graduate dorm and rather than the cool apartment (used to be a room for two, but now was one, I was getting a 10 foot by 9 foot room (Think that’s not bad, well try putting a wardrobe, bed, desk, chair and dorm fridge in that space. Still not convinced, being new legal researchers we checked, you can’t keep prisoners permanently confined in that small a space, it’s a violation of their human rights). They mess up my meal plan (no food the first day, well except for running to McDonald’s), and now I had to cross campus to sign my student loan papers. This was Case Western Reserve, so I technically owe them my first born, but they’ll give me the title to Becca next December when I make my last payment (That’s 19 years of payments folks, for a three year degree, had a full ride for undergrad) and no way, should I not pass law school and the bar, that I’m paying that back.

So, totally freaked out, I walk across campus to sign away my life. But, what happens? Well, the National Air Show is in town that weekend. Some poor fighter pilot, who I am sure had to fly all boring and fuel consciously normal cross country, is in the sky. But now it’s to warm up for the show, so they’re letting it all rip (think Blue Angels, Thunderbirds, etc). You didn’t have to see the pilot to see the joy. And what is the pilot using for a landmark for their routine to center on? The rather unremarkable building on the CWRU campus where Kurt, the aviation nut, is going to sign his life away.

You’ve got to pay really close attention to God these days. The signs are getting a mite too subtle. I keep worrying I’ll miss one and do the equivalent of the 40 mile, no pancake, “Death” ride. But, if you quiet your heart, and do some praying. You’ll be amazed at these little signs. So, where is God sending you on the path of your journey? Better check the signs cause God quit issuing those maps.
Posted by Kurt Young at 7:27 AM No comments: